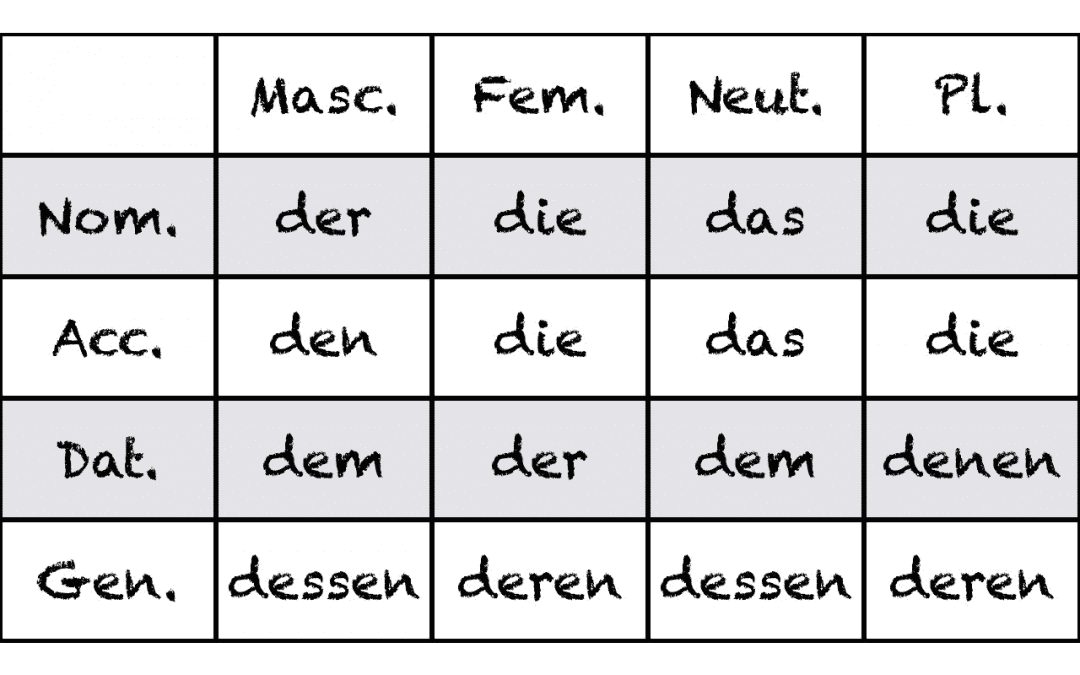 Following on from our post on different German pronouns, there are more to get your head around! This guide to relative pronouns will definitely help both your written and spoken German as basic sentences can become longer and even more complex.

What are relative pronouns?

They are words that connect sentences. In English, they translate to words such as which, who, that or whom. For example, we could have two sentences: We sat at the table. The table was beautifully decorated. To make this easier to read and less chunky, we can simply write, ‘we sat at the table which was beautifully decorated.’ In German: Wir saßen an dem Tisch, der wunderschön dekoriert war.

German relative pronouns can also introduce further information about someone or something that is already being described. For example, Maria, who wants to travel the world, quit her job. Maria, die eine Weltreise machen will, hat ihren Job aufgegeben.

So how do German relative pronouns work?

Similar to most German grammar rules, relative pronouns must agree with the gender and number of the noun which they refer to. And of course, there’s a great table to go with it!

You may notice that apart from the dative and genitive cases, relative pronouns act very similar to the definite article. 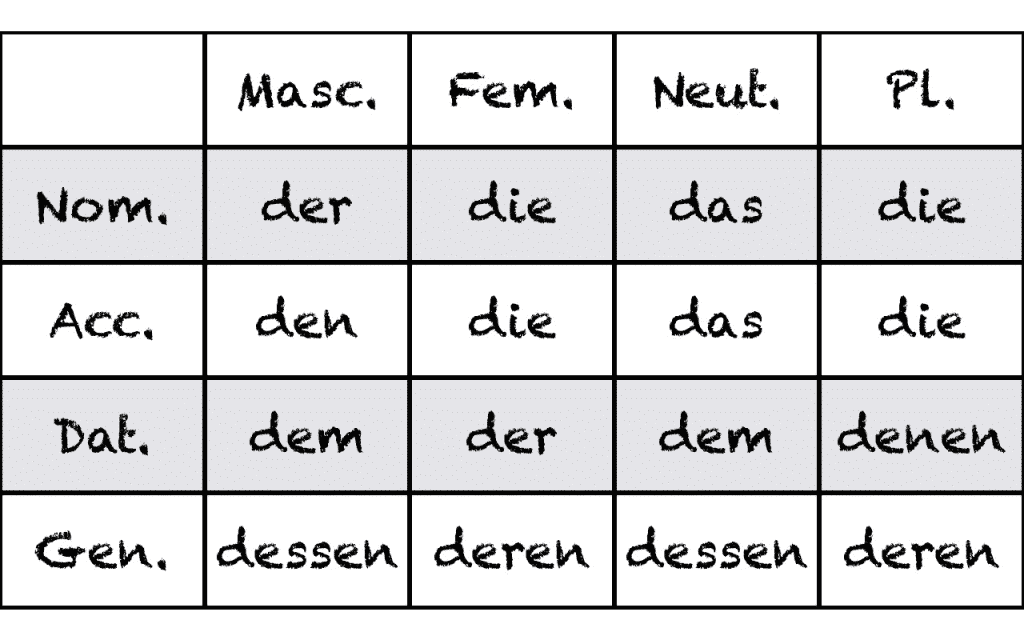 1. Relative Pronouns must agree in gender and number of noun which they refer to, but take their case from their function in the relative clause.

The woman that I spoke to yesterday was very angry.

1. The relative pronoun will therefore agree with the subject, the woman, and therefore be feminine.

2. We must further analyze this sentence before we can pick the correct relative pronoun. What case is the relative clause in? We know that in German, to speak to someone requires the verb ‘sprechen mit’.

3. We also know that from our knowledge of prepositions, ‘mit’ requires the dative case and the relative pronoun must therefore be in the dative form.

4. All that’s left to do is to scan back the table, trace the FEMININE DATIVE relative pronoun = der. We are therefore left with:

The man that I saw today went on holiday.

We can see here, that the case is in the accusative and the gender of the noun, der Mann, is masculine = relative pronoun den.

2. Relative pronouns always send the verb to the end.

As we can see in the previous examples, a relative pronoun sends the conjugated verb to the end of the sentence.

He bought a new car, which was very expensive.

Firstly notice how the auxiliary verb ‘war’ is at the end. Now to analyze the clause: the relative pronoun is ‘das’ but why? It needs to agree with das Auto, a neuter noun. And then we can see it is in the nominative case as the verb at play is sein.

When relative clauses begin to get longer and more complex, they will contain more verbs and therefore more relative pronouns. In order to write and say these correctly, we can listen to the rule verb comma verb, so that we place all the elements of the sentence in the right position.

2. The old woman, who sold her house, met the new owners.

3. A pretty flower, that grew alone in the garden, was dug up.

What becomes clear, is the position of each verb in the sentence. For the relative clause that comes after the relative pronouns, the verb comes directly AFTER the comma.

We believe that if you follow these three steps, then any German sentence can be formed with the correct relative pronoun. However, do you have a deeper intrigue and interest about all things German grammar? Why not check out the courses on offer at DAS Akademie to stimulate your German learning even further whilst having fun at the same time!