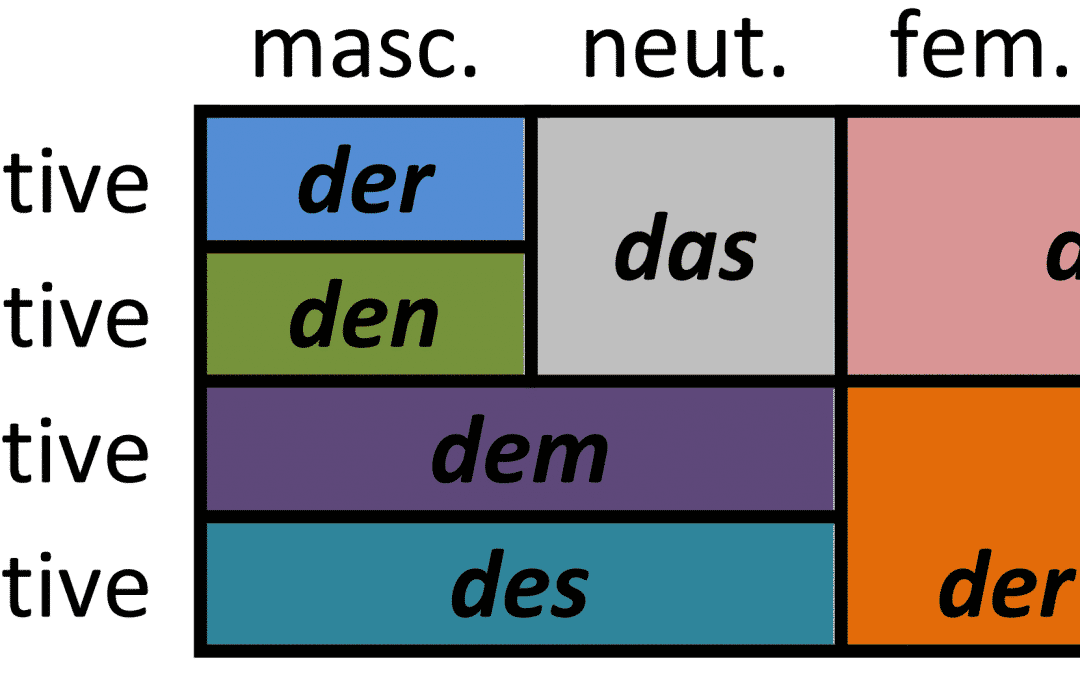 German cases? For any German language learner, the cases play a huge role in how sentences are formed. You may already know that in German, we have the Nominative, Accusative, Dative, and Genitive case. Each of these have a different function. However, if there is any confusion about how each one works, then this page is definitely for you!

How can we understand the German cases?

There are a few things we need to know before we can completely understand the German cases.

If we look back to our post on German Nouns, you will remember that they have genders. For example, der Mann, die Katze, das Auto.

2. A German noun’s article changes depending on whether it is a subject, object, direct object or indirect object. This can help us know which case must be used… Let us take a closer look:

Got the basics? More on German Cases:

Like most German grammar rules, a table can come in very handy! It makes learning how the German cases much easier. Saying them out loud also helps as you can add a rhythm to it. This is the definite article table, the same works for the indefinite (ein). However, the masculine nominative stays as EIN, and likewise the accusative is EINEN, dative is EINEM, and genitive is EINES.

And now for some examples…

The woman is listening to music –  Die Frau hört Musik.

The child goes to the park every morning – Das Kind geht jeden morgen in den Park.

Here, two cases are identified. Das Kind is the subject and therefore in the nominative. However, we know from our knowledge of prepositions, that IN + movement = the accusative case. So ‘der Park’ changes to ‘den Park’.

As you can tell from the table, only the masculine form changes in the accusative. The rest stays the same as the nominative.

I am eating a piece of cake  – Ich esse ein Stück Kuchen.

I will send you the email – Ich werde dir die E-mail schicken.

Giving thanks TO the children = ‘the children’ are the indirect objects and therefore in the dative case. We scan back to the table and see that plural dative = den. The nouns in dativ plural also get an additional n at the end.

We must remember that with masculine and neuter articles, the noun agrees. This is why we add an ‘s’ to the end of the noun.

You will have definitely conquered the German cases by now if you have read this through and understood the rules. However, this was just a taster of the grammar concepts that can be taught when learning the language. What to learn more? Why not check out our online German courses and see what classes we have on offer to suit your level and availability!